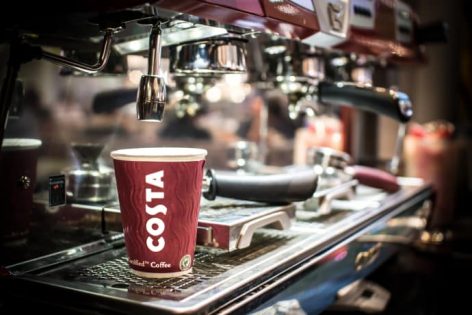 Costa has launched its nationwide cup recycling scheme, which promises to recycle “any cup” – even from competitors – following a successful trial.

The coffee chain will also launch a number of new initiatives in the first quarter of 2017. Aiming to increase the number of takeaway cups recovered and recycled across the country, customers will be encouraged to partake in a new recycling scheme in stores no.

The scheme, available in over 2,000 Costa stores nationwide, aims to recover and guarantee the recycling of any paper cup – from Costa or any of its competitors. Once deposited at a Costa store, the cups will be collected by Costa team members and stored in cup racks, back of house. The scheme follows a successful trial which took place across over 45 stores in London and Manchester, during 2016. In addition to today’s launch, Costa now offers 25p off when using a reusable cup at Costa or franchised owned store. Costa will also introduce two new, multipurpose, reusable cups available to purchase in stores in April, 2017. Costa is conducting independent research with Sheffield University to further investigate cup recyclability. Research results to be shared Q1/Q2. It’s also working in conjunction with several packaging companies, including long-term partner Huhtamaki, as well as Delipac, Frugalpac and reCUP and say it will shortly begin investigating manufacturing processes and test materials for a potential new takeaway cup. Research is currently limited to out of store testing only.