According to the figures, which are submitted on behalf of the EU’s 27 member states, as well as other European nations including Norway, Switzerland and Montenegro, the UK’s combined recycling and composting rate stood at 43.5% in 2015, down from 43.7% a year earlier. 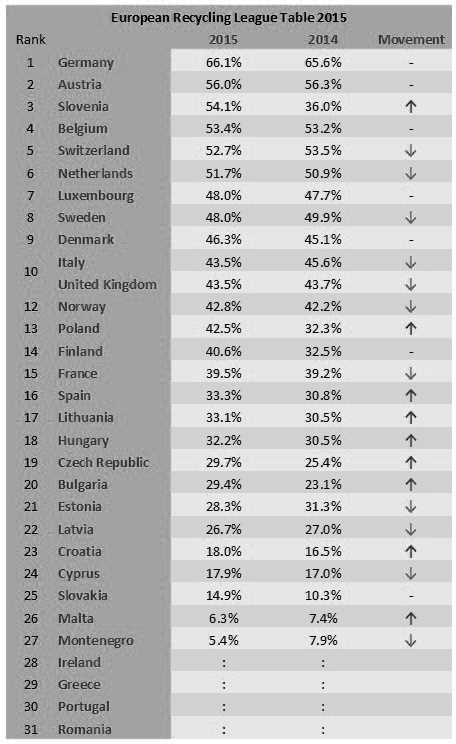 Germany hung onto its spot at the top of the league table, with an overall recycling rate of 66.1% for 2015, a slight improvement on its previous performance, comfortably clear of the second top performing nation Austria, whose recycling rate stood at 56% for the year.

On average, EU member states recycled 45.2% of their municipal waste, the data suggests. Data outlining the amount of waste landfilled per country has yet to be published.

For the UK, the amount of waste generated per person increased from 482kg in 2014 to 485kg, although this ranks far behind the continent’s top waste producing country per person, Denmark, where 789kg of waste was produced per capita. Cyprus, Germany, Luxembourg and Malta all produced in excess of 600kg of waste per person.

If you want to recycle more and increase your recycling %, please contact us at Ribbex to arrange a free of charge site audit and no obligation quote.